Dentist For Sharks? Ocean Acidification May Make Their Teeth Vulnerable

What We Can't Sea

Most people don't think about sharks when they hear the word "acidification," but a growing acidification of the ocean could have serious implications for these apex predators. Increasing levels of CO2 in the atmosphere are causing problems for animals on land and in the ocean. The planet is warming, and oceans are becoming more acidic as carbon dioxide enters the water. This acidified seawater can have a “corrosive” effect on many marine organisms that use calcium carbonate to make shells, and may also have an effect on shark teeth. This corrosive effect may make teeth more brittle and easier to break, compromising how well the teeth can grab prey. Sharks are important predators and often help control ecosystem dynamics. Researchers from China, Australia, and French Polynesia set out to investigate whether sharks could modify the properties of their teeth in order to adapt to warming and ocean acidification. 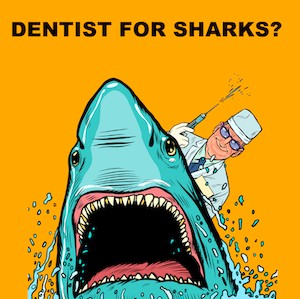 Dentist For Sharks? Ocean Acidification May Make Their Teeth Vulnerable